When local company Stace Roofing Ltd of Melton Mowbray were looking to expand their business and improve storage space, they contacted Mowbray Interiors for a solution.

Our team attended site and met with Managing Director, Andrew Stace, to discuss the opportunities available to them in their new building.

The client required a specific layout where our Mezzanine columns would not interfere with the layout of new offices at ground level. Mowbray designed a proposal where columns could be hidden and 1 hour fire rated within the ground partitioning.

Stace Roofing were delighted with our proposals, during which it became apparent that they were negotiating on the unit next door to the one where the mezzanine flooring was to be installed. Further negotiations between our Sales Director, Mark Davison, and Mr Stace resulted in a deal being struck, and both contracts awarded to Mowbray Interiors.

Both projects were delivered on time and on budget – and a new relationship forged for future opportunities. 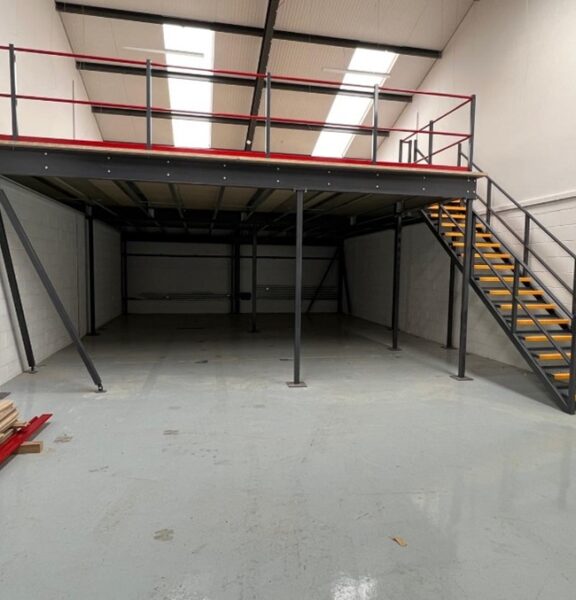 “Mowbray Interiors carried out the installation of 2 mezzanine floors for us.
The entire process from start to finish was well priced, organised immaculately and we are totally made up with the finished result. Great company to work with, wouldn’t hesitate to recommend them to anyone.”

If you want to maximise your workspace, an industrial mezzanine floor could be a good fit for you. Please get in touch with us at info@mowbrayinteriors.co.uk to discuss how we can help you make the most of your new or existing building.